Watch this trailer. Everyone I know is going crazy for this movie. I have no idea if it’ll appeal outside that small demo who cares about casts, who love the idea of a spy thriller with Gary Oldman, John Hurt, Mark Strong, Colin Firth, Tom Hardy, and Benedict Cumberbatch. But if you notice, really the cast is all that movie has going for it. If it weren’t for the cast, would we give a shit?

Most trailers are like that. Most movies these days are just variations on shit we’ve seen 1,000 times before. What makes them pop, what attracts your attention, is the execution. You can’t, in other words, just hit the random item button on TVTropes.org once for every 5 minutes of movie and then congratulate yourself on a job well done.

But increasingly directors/writers/producers rely on exactly this. In the absence of storytelling, which perhaps they consider boring, they recognize their movie needs certain plot elements. I think I started to notice it around The Matrix.

Neo and Trinity have to fall in love. The fact that the two actors have no chemistry, Neo has exhibited no insight or any other redeeming trait, doesn’t matter. “In movies like this,” the Wachowski bros. say, “the guy and the girl fall in love, so here we’ll have Trinity say ‘I love you.’ and we can check that item off the list.” They do no work for it. They execute on it…not at all.

I see this happening all the time now. It’s like the directors (who might not be entirely to blame, but in this case, I think we can agree, Cameron is entirely to blame) know their audience has seen all the movies that inspired them and so felt it was a waste of time to actually do all the work, the really hard work, those older movies did to win the audience over to the characters and their plight.

In Dances With Wolves, a movie Avatar owes an obvious and noted debt to, Kevin Costner the storyteller busts his ass to get you to believe in the reality of John Dunbar. The guy spends like 20 minutes out in the prairie alone, just him and his horse and the wolf. It takes time to set all this stuff up and then once you’ve stolen that time from the producers who want action sequences and sex, you need believable human characters. The Indians he meets seem like real people. They exhibit doubt and hope and ignorance and humor and frustration and fear often all in the same scene, and we believe in them.

Sure, we know what’s going to happen. We all saw Lawrence of Arabia, we know he’s going to go native. So there’s a momentum there. Because they are cast well and acted well, we want Dunbar to like the Indians and we want them to like him.  But it doesn’t happen in 10 minutes. There’s no climactic, movie-ending battle scene to get to. Avatar takes no such time, spends no effort, none, zero, on dialog, plot, or characterization. I didn’t believe in any of these characters. I didn’t care if they lived or died. James Cameron executed the shit out of this movie. It’s visuals. The world he built and the technology he used to bring it to us. And that’s where all the execution went. The story is nothing. It’s less than nothing, it’s insulting.

My big complaint about District 9 was the lack of a single human character who wasn’t either a clueless idiot or an unrepentant douchebag. But there was one moment where the bad guy looked around and pointed to the main character and said “That guy knows what’s going on.” It was the only time anyone in the movie showed the slighted bit of awareness or intelligence and that puts the story of District 9 one up on Avatar.

It’s difficult to describe how bad this movie is. Difficult because the movie is long, and therefore a catalog of its sins would take a lot of work. Perhaps the most damning thing I can say about it is; everyone in the movie talks like a video game character. Everyone is performing. No one is acting. There were moments where Sam Worthington was allowed to behave in a manner approaching natural, but these were carefully constructed as breaks in the otherwise dead screenplay. Dead as in lifeless. Corpselike. It may rank among the worst movies I’ve seen.

But you still have to go see it, so who cares? In spite of all this, in spite of the fact that having seen it, I don’t think I could bear to sit through it again, I’m glad I saw it and glad Cameron made it because visually it lives up to every ounce of hype.

Even the performance capture, which I’ve seen before, works. You can see Zoe Saldana in there. The actors are very proud that their actual performance is up there in CGI on the screen. They should not be proud, because none of them were needed. Any community theater troupe could have handled these lines, these characters, but you still recognize Sam Worthington in the CGI. I’m sure that makes him and his agent happy. I’m not sure what the benefit to us, the viewers, is.

Avatar is another mashup like Star Wars. Cameron pilfers from everything. He steals from Return of the Jedi, Roger Dean, Dances with Wolves. He’s got Anne McCaffrey’s Dragonriders of Pern in there and he steals from himself in that many of these characters are right out ofAliens. The most astonishing failing of Cameron the storyteller is that he can’t even steal from himself effectively. His colonial marine dialog here is terrible. It’s so awful I wished I didn’t understand English. If this movie were done in Farsi and I was watching without subtitles, I bet I’d have loved it.

Alas, I do speak fucking English and so sat desperately waiting for everyone to shut up so we could get back to the world. The world is beautiful. I want to move there. I want to live there. I want someone who’s spent some time here on Earth and knows how human beings speak and relate to each other to tell a story there.

This is not a science fiction story. It’s a science fiction setting, in that it takes place in the future and on another planet, but there’s nothing speculative about it. The natives are not aliens. I should repeat that, they’re not aliens. They’re tall blue Native Americans. There’s nothing remotely alien about them except kinda their appearance. One of the things that makes aliens alien is the fact that we cannot understand them. That’s one of the other meanings of “alien.” Incomprehensible. The Na’vi are perfectly comprehensible. They’re so comprehensible they’re transparent. If the same time and thought were put into creating an alien culture, one just a little alien, one just alien enough to really challenge us, the audience. Then we’d maybe have an SF story.

I would have loved the main character to have any virtue, any redeeming quality other than…I don’t know, he showed up. He’s hard to kill. That’s about it. If the aliens were even a little alien, then our main character could show us why he’s special by unlocking the secret of the alien culture right in front of us, and then we’d believe in everything a lot more. As it stands, I believed in the world. I believed in Pandora. I just didn’t believe in any of the people, regardless of skin color.The 3D works pretty well. It’ll never be perfect, whenever they use a depth of field filter, you’re essentually held hostage and forced to focus on whatever the 3D camera is focusing on. Trying to focus on anything closer or farther away creates this double-image that will give you a headache.

But in spite of that I eventually stopped noticing the 3D gimmick and just saw a 3D world in front of me. I haven’t seen the movie in 2D so I can’t say how much of the beauty of the world is a result of the 3D. But it’s so breathtaking and stunning and the 3D works so well that I figure you might as well presume that some of that response is from the 3D and see it in a 3D movie.

If action scenes count as story, then Cameron doesn’t fail completely as a storyteller. There is a great and epic battle at the end, somethingDances With Wolves somehow managed to win a billion Oscars without, and even though the main badguy is absurd, it was still a hell of a thing. James Cameron may have forgotten how human beings work, but he still knows how to shoot an action sequence.

And he knows how to build a world. Watching the credits, I believe there were literally thousands of people working on this movie, and it shows. It’s beautiful. It may be the most beautiful, awe-inspiring thing I’ve ever seen on film. That alone is worth the price of admission. 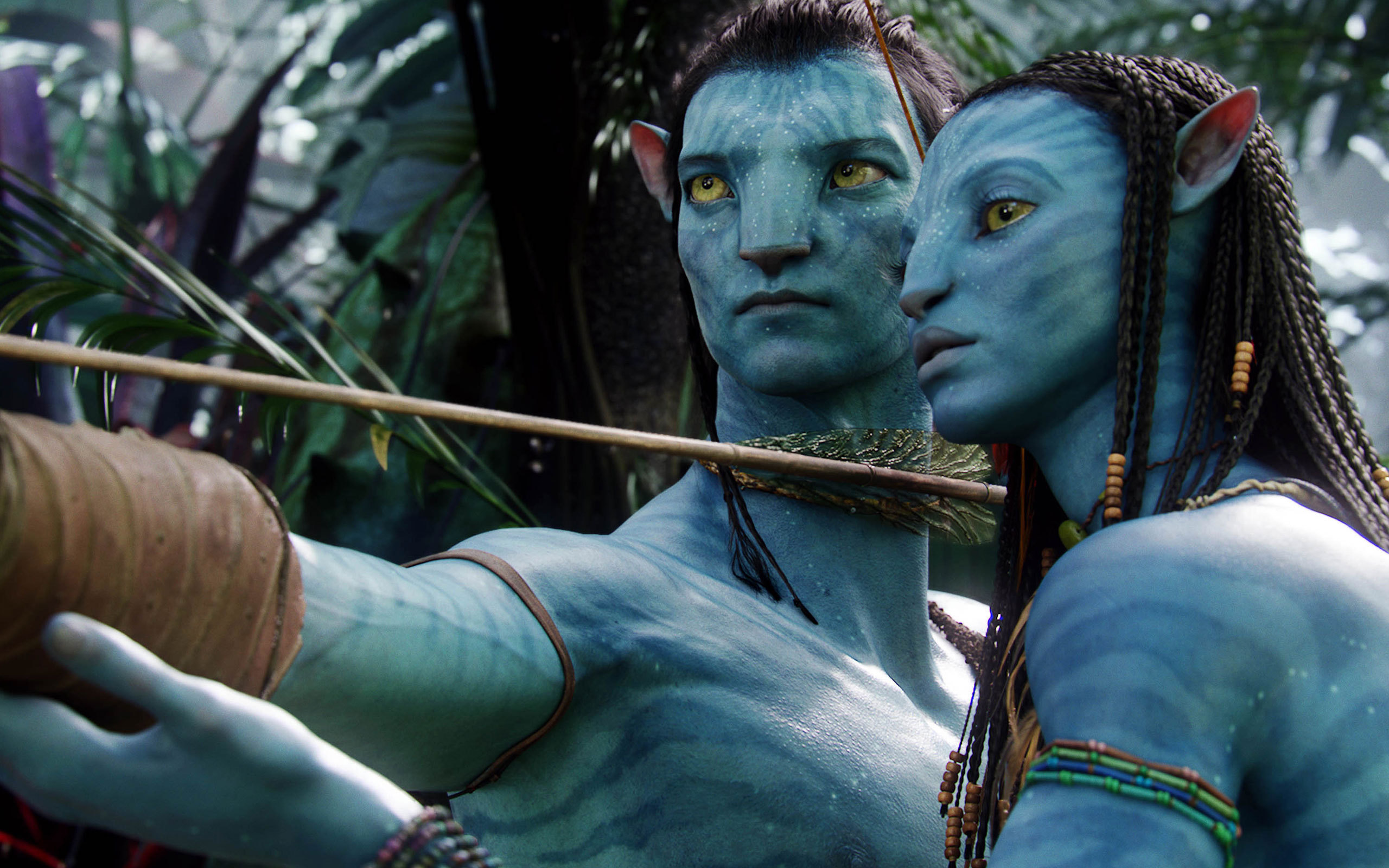 When I was a tiny person I lived in New Hampshire and one of the most amazing things I got to do there was go to the New England Aquarium which was an amalgam of an aquarium and a science museum. It was massive and there was tons to do. The entire place was lit with blacklight making otherwise ordinary white cloth fluoresce. They had dozens of interactive science exhibits before anyone used the term “interactive.” There was a water fountain burbling under a strobe light. You could control the speed at which the light strobed allowing you to make the water appear to flow faster, slower, backwards, even stop in mid-air and hover. The entire place was like that. Alien shapes swam around you while you discovered and learned the secrets of how the world worked in this ultraviolet cathedral of science.

That’s what watching Avatar was like. I was transported back to being 9 and discovering a new and secret world full of alien wonder. The night sequences in the movie were especially breathtaking.

It broke my heart when people started talking.