Digging Through the Cultural Wreckage

If there is any insight in this post, it necessarily follows hard on the heels of the brilliant Todd Alcott and his original observation found in his analysis of the Venture Bros.

Everything that happened in “the past” in The Venture Bros always seems important and vital, and everything going on “now” seems really chintzy and desperate in comparison.  The characters on the show are all living in what feels like the wreckage of a generational plane crash, their lives have no meaning and so they’re constantly trying to create meaning out of the twisted shards of the past, these really poorly-conceived adolescent fantasies of power and control.

Starting in 1982, we had this great, persistent theme in SF cinema. The question of identity. Plato, trying to make a point about something else, asks us to consider how we would react if we found out the world we know is an illusion. Phillip K. Dick took the issue one step farther. “Forget the world,” he said, “how do you know who you are?” It’s the ultimate existentialist question. One implied in Blade Runner, made explicit in Total Recall, Minority Report, most recently in Moon.

Now it seems to me like we have a new theme arising, at least in part by accident, and that is: the past is more interesting than the present. And, by association, the future. We see this in video games all the time now, but I don’t think we’re doing it on purpose. I think it’s a theme arising out of the way stories are designed.

A lot of game designers are wary of any situation in which the player is not in control of their character. I sorta feel like the ship has sailed on that issue, and most players don’t even notice time spent in a Briefing Room or some other Cinematic as long as it’s good, but it’s natural for someone making an interactive experience to distrusting anything non-interactive.

It’s a challenge, making a story in a video game without any moments of non-interactivity. No cinematics, player always in control of their character. Some companies punt. Valve has “interactive” cinematics, but they’re interactive in the sense of “not interactive.” Alyx and Dr. Vance are going to sit there and talk to you and there’s no way for you to do anything in that room to affect anything they say or do and they will never react to you in any way. You’re a hostage who can walk around your cell. It’s so non-interactive, you don’t even talk. The most basic form of human interaction possible, speech, denied to the hero. There are characters in the game, but you are not one of them. You’re a spectator in your own story and that seems like a problem to me.

There is one classic way to convey a story in a completely interactive manner and that is; discovery. Bioshock and Dead Space and a dozen other games do it this way.

In these ‘discovery’ stories, your character walks around environments after the shit has already hit the fan. Clarke, in Dead Space, spends his time reading and watching reports about what happened before he got there. Jack, in Bioshock does…the same thing. In each instance, the story already happened. You missed it. You’re just playing through the act of finding out what happened. It’s like playing someone reading a book. There are good stories in these games. I like them. But they’re not my character’s story. My character is as much a witness to events as I, the player, am.

In games, this is a design decision. Characters in video games, basically, look crap. It takes a monumental fucking effort, a colossal amount of resources: time, people, money, technology, to get people in a video game cutscene to look barely ok, and to what end? It’s not gameplay. So we push the real story into the background. It already happened. You’re going to find out about it.

The side effect of this is that we’re unconsciously making a statement. We’re saying everything that happened before we showed up is necessarily more interesting that whatever we’re doing. This is a kind of inadvertant theme. I don’t think Bioshock or Dead Space are doing it on purpose.

Chell from Portal 2 and Dr. “Rusty” Venture share the same role. They spend all their time rummaging around in someone else’s story. Someone more interesting, a story more interesting. 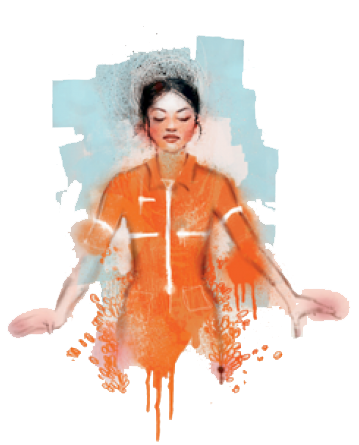 Chell is the captive of an insane robot. All she can do is escape. She has no character, no personality or dialog or motivation other than to get out. The process of getting out is little more than an extended sequence of bearing witness to how awesome things used to be. We go on a tour, a long tour, of Aperture Science and listen as Cave Johnson, a far more interesting character than the one you’re allowed to play, effortlessly invents the most astonishing technologies.

Friday night we’d fly down to Cuba, arch Castro for  couple of hours, then swing up to the White House for a “debriefing.” That’s Jack’s code for one of his legendary pool parties. Round two, we’d jet over to Vegas in time to catch Frank’s last show at the Sands, then ‘bingo-bongo,’ down to Coco Beach, whip it up with the Mercury guys.

Nothing Rusty does will ever be that interesting, that vital. Those things really happened, absent the Action Man obviously. There really were seven Mercury astronauts who went into space. Men really walked on the Moon.

Because it seems so much more interesting to us than the present or, indeed, the future. That generation went and fought WWII, literally saved the world, invented the Atomic Age, and then went to the Moon. They dreamed ridiculously big dreams, the biggest in history, and then went and did them, it appears, effortlessly. We percieve no gap between their reach and their grasp. The Baby Boomers, their kids, had big dreams too. They were mostly artistic, the music and movies of the 1960s and 1970s.

That’s the point of the Venture Bros. All we have are these old dreams we were handed down, but the world has moved on. There’s never going to be another WWII, another Manhattan Project, another Golden Age of SF, another Space Race, another Woodstock, another Easy Rider, another Pink Floyd, another Taxi Driver, another Star Wars. We got…Google and YouTube and iPhones and the Wikipedia. Those are nice, yeah. I’m one of those people who thinks the democratization of information is going to change human development the way writing and printing did, and the way the Space Race did not. But if would have been nice to walk on the Moon, yeah? It would have been nice to see someone I went to school with walk on Mars. None of that happened. It all just…stopped.

That’s what you’re seeing when you walk around Aperture Science. You’re seeing a psychological landscape. The environments are huge because they reflect the dreams of Cave Johnson and his generation. Massive in scope and scale.

These were the dreams my generation inherited. People talk about jet packs and flying cars, but those people are being glib. We were promised a real future, this one. When I was in grade school, we learned about space and space science under the explicit assumption that it would be relevant to us. Everyone thought the Space Program would continue.

But  it all collapsed. Cave Johnson and Jonas Venture created marvels. Our grandparents walked on the moon. The best you can do in Portal is, maybe, get out. Essentially the same thing Rusty Venture is trying to do. Chell’s life and Rusty’s life, both effectively destroyed by the dreams of these people they never know. The best they can do is escape with something of themselves intact.

It’s no coincidence that we never meet Cave Johnson or Jonas Venture. We only hear the former, and see the latter on TV and in flashbacks. Because our generation perceives the Greatest Generation as essentially unknowable. Hard to relate to. How do you relate to a bunch of people that saved the world, invented the atom bomb, and then landed on the moon?

Games like Mass Effect, L.A. Noire, Red Dead Redemption have real stories with characters who are doing something vital and interesting. But that kind of story requires putting people in your game. People you can meet, talk to. People who can want things, have different points of view. That takes so much effort, money, time, talent, story becomes what your game is about. The best we could say about the gameplay for Mass Effect 2 was “pretty good for an RPG company.” The run-and-gun in most Rockstar games is crap. Why?

Because they know they’re not selling the gameplay. They’re selling the narrative. And even then…the models and animation look…they still look pretty crap. We forgive them, we forget, because it’s a video game, but if Pixar released the cutscenes from Red Dead Redemption, we’d demand our money back and sell our stock.

Video game stories generally lack theme. They also lack a lot of of things good stories have. They lack subtext, ambiguity. No one in a video game ever thinks something without then saying it. These stories aren’t about anything. Typically, if I ask someone “what’s the game’s story about?” regardless of the game, I get some variation of “it’s about what it means to be a hero.” I don’t think that’s remotely true, I think people say that because they’re playing the hero, and feel like they’re making a difference, so the story must be about What It Means To Be A Hero. They never for a moment thought “what is this story about” before I asked.

But games with a “Discovery” story do have a real theme, whether they like it or not. They propose the past is necessarily more urgent than the future. You inherit this theme when you decide “man we’re never going to have the time and money to make all these cinematics look good. Fuck it, let’s just have the player scrounging around in the aftermath, putting the pieces together.”

I don’t mean to criticize that decision, I loved Portal 2. I love a lot of these games, I love their story. But it’s not a story I’m involved with. I’m just reading along after the fact.

We play Chell, and Chell literally has no personality. She makes no difference to the events in the Portalverse. What does that say about us? Everyone in Portal 2 is more interesting than you, Valve is saying.

You are boring and irrelevant, but if you just sit back and listen, you’ll hear about someone super interesting. Someone from an earlier generation who did amazing things.

Someone who’s going to invent a combustible lemon, and burn your house down!