Before the movie started, my friend Mark related the story of working in Los Angeles and getting passes to be in preview screenings of movies. This is a shared experience many of us have. I saw Back to the Future and Legend and a few other movies in test screenings when I was a kid.

He describes seeing a movie called Valentine having no earthly idea what kind of movie it was going to be, nothing except the title, and so when the first scarey moment happened, he almost shit himself. The movie, he explained, wasn’t very good and wasn’t that scary once he knew what he was in for. But not knowing, that first moment was among the scariest he ever experienced.

I think I probably would have liked District 9 more if I knew literally nothing about what I was going to see when I sat down. This is, however, not an experience we often have. TV is our only avenue for that kind of discovery, that kind of tabula rasa experience. I was reading a retro-article from the early 1980s about the advent of the “remote control” culture and “channel surfing” and how degenerate it seemed to the people who were adults at the time. Like their kids had some sort of disorder because they’d change the channel every second. But that experience has a lot to recommend it. You come across some amazing shit when you have 0 expectations and judge the work purely on your reaction to it with no marketing between you and the authors. Often showing up in the middle, without any backstory. The movie didn’t begin in media res but your version of it did.

Someone stumbling across District 9 as they channel surfed (a dying experience, I believe, with the advent of streaming) would probably have their mind blown. I, however, did not. I knew what the movie was about and so was a little disappointed.

It’s hard to criticize this movie if you know how it was made. The whole thing looks like a $120 million movie, but cost only $30 mil plus some Halo money. When you know that, you tend to give it some slack. It’s damned impressive for thirty million. What a cop out, huh? Damned by faint praise.

The main failing of the film is the completely lack of anyone to give a shit about, except maybe the aliens. Every single human character in the film is a worthless piece of shit. I’m not sure, maybe that’s the point of the film. When you know you’re in for a movie about a bunch of aliens in a ghetto in Johannesburg, you expect some subtext, some political allegory, but it’s hard to get any kind of meaning from a film that paints all its characters with such relentlessly bleak negativity. “Turns out, we’re all bastards!” Well, that’s a kind of dead-end, isn’t it?

Allow me to give an example. When the main character, obviously ill, disoriented, staggering around, vomits blue goop onto his own party cake, his friends and family just watch. For quite a while. And frown at him. Not a single person at the party, including his wife, suggests or even implies that maybe someone should call an ambulance. Imagine John Hurt writhing on the table in Alien, the chest-burster rupturing through his sternum in some twisted nightmarish version of birth, and everyone else just standing around watching, not helping, turning to each other and commenting “what an asshole.” That’s the kind of human we’re dealing with here.

There’s a moment when the Head Evil Mercenary Dude looks around in the middle of a firefight during which all sorts of crazy alien shit has happened,  points to an alien he’s captured and says: “that guy knows what’s going on.”

He’s right. He’s absolutely correct. It is literally the only time in the movie any human being displays even an ounce of sense or insight.

A lot of the movie, like The Matrix, seemed to think that storytelling wasn’t necessary since they’d already decided they were going to make people one dimensional and trot out some cliches. “Listen,” the movie says. “You know that bit where no one believes him and his girlfriend abandons him and he’s all alone, right? So we don’t have to mess around with that do we? Here’s a phone call from her, you know what she’s going to say, so we’re just going to kind of say it quick and move on. Just imagine there was a whole relationship there you belived in and which just fell apart, ok? We’ve got some robots to fire up.” 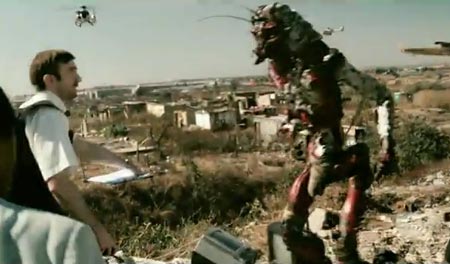 We don’t know enough about his wife and their relationship to give a shit either way, which is probably for the best because this movie has such a dim fucking opinion of the human race, if we learned any more about her we’d probably end up hating her too. You know the stereotype of Dick Cheney as the evil mastermind? Well, imagine if A: he really was that guy and B: he took his lesbian daughter whom his party’s platform demands he abjure and instead of coming out in support of her, put her in a blender, juiced her, and drank her. Then he’d be all of the main bad guys of this movie.

A man may smile and smile and be a villain. Yes. But apparently in the future he can just be a villain and bypass the smiling part.

We’ve come full circle somewhat. Peter Coyote’s character from E.T. didn’t want to cut the little alien open and feast on his floppily-doppilies. The only reason Eliot thinks he’s going to do that is because Eliot’s head is filled with old SF where the bad guys always want to dissect the local aliens. Coyote’s character has to explain that in fact they’re trying to save E.T. Indeed, if we look back at the movie, all Eliot did was keep the sick alien away from the only people who had a chance of making him well again.

In District 9, everyone is either A: an idiot, or B: exactly the people Eliot thought Peter Coyote’s character was. It’s the 1950s all over again. They want to juice the aliens, they want to steal what the aliens have, they want to profit from it, they want to exploit them and each other and will destroy anyone and anything, heedless of any consequence to do it. Shit, watch the original Day The Earth Stood Still, we’re way worse now in District 9 than any humans were back then.

If these were two dimensional characters, that would be great. I have a great fondness for 2 dimensional characters. These guys are barely 1 dimensional. The only thing they’re missing is mustaches to twirl and blonds to leave tied up on railroad tracks. It’s dangerous to generalize. Does this movie just happen, by co-incidence, to feature nothing but worthless humans? Or is it just South Africans? Or is it everyone? Fuck you, either way.

The main character is something of a cipher for every fucked-up dysfunctional character ever. He’s a groveling sycophant, an inept bureaucrat, a bloodless coward, and a sociopathic bully. He’s so irredeemable the only way he’s able to get even a little perspective on the horror of the reality he’s lived with for 20 years is by being literally turned into one of the aliens. Only then does he seem to entertain the notion that, hey, maybe these guys aren’t so bad. But then, the entire rest of the cast is trying to gun him down, run him over, and blow him up all at once so it may just be that he likes the aliens because they’re the only ones not trying to kill him.

The action sequences and special effects are top notch. It’s hard for me to get behind the acting because the actors are given such weird characters to play. There is a WHOLE LOT of Chekov’s Gun in this movie such that you almost need a score card to keep track of every critical plot element and coincidence they mention in the first act so that, upon trotting them out in the third act you’ll know what’s going on. Get ready, because I’m about to praise Die Hard again

You know, when John McClane learns about making fists with his toes, it’s in service to a scene that tells us he doesn’t like to fly. So if he doesn’t like to fly, what’s so important that would make him overcome that? Oh, his wife. And their relationship is on the rocks. All that from fists with your toes. That’s tight plotting. In District 9 it’s fists with your toes now, so that in an hour and fifteen minutes he can punch people with his toe-fists. That’s it. These data points we’re given aren’t in service to anything. The alien weapons can only be fired by the aliens. That’s it, no further exposition, no insight into why that might be or what it says about the aliens, because it doesn’t say anything about them. The Nigerians want the alien weapons even though they can’t use them, for no reason, no insight there into the Nigerians or anyone else. They’re only important because the plot needs them later.

I realized pretty quickly that I didn’t want to see the movie they were showing me. As the main character drives around District 9 alternatively being afraid of and brutalizing the aliens, I thought “Oh. It’s this then, is it? I want to learn some more about the aliens.” They just aired Alien Nation on SciFi and I had one of those moments where I felt certain they were deliberately trying to remind us of a current-movie’s roots, by showing the stuff that inspired it.

When Alien Nation came out, I was impressed, but only because I thought it was going to be crap. It’s actually pretty good. Better, I think, than this movie and at least part of that is the view into the alien’s culture and lives, almost none of which we get here. What were they doing on that ship? Why did it stop working? What the hell was going on?

I’m not saying the movie had to answer those questions, nothing could be further from the truth, I’m just saying that I’d rather have learned about that, than get the story I got. You know, I didn’t like the bit in Footfall where the journalists turn out to be so blinded by their quest for a story that they will betray the human race’s plans for a counter-attack to the alien invaders, I thought it was just the authors hating journalists and putting their hate into the book. But at least it was a point of view. It was a statement about something, even though I didn’t like the statement, it was well-done.

It sounds like I hated this movie and I usually don’t come in and say “I liked it” or “I hated it,” because I think that’s lazy. But I do want to say “it’s not as bad as I make it sound.” You don’t really think about a lot of these things while you’re watching the movie, because it moves so fast. And every time they use the POP gun on the humans, no matter how many times they do it, everyone in the audience goes “AAUGH!” So that’s fun.

Just try not to think about how awful everyone in the movie is.