There’s a scene in the classic thriller The Day of the Jackal where cool, English, sophisticated Edward Fox is using his custom-made rifle to shoot at melons in a overgrown field in the middle of France. He’s doing this, wearing a very natty ascot, because he’s a paid assassin, practicing for his planned hit on French President Charles de Gaulle.

That’s a great juxtaposition. Debonair, efficient, not a care in the world, plugging away at watermelons and this works, there’s tension in this scene, because we know that he’s planning on killing the President of France, and we know he knows. That he can be so suave while he’s imagining de Gaulle’s head exploding makes an otherwise non-descript scene work.

George Clooney as the title character in The American has exactly that same scene. Wildflowers instead of melons, Italy instead of France, and an overgrown river instead of an overgrown field. But the gun is his, also self-built, for the same reason.

But even though it’s the same scene, it is in all ways the opposite of the scene from Day of the Jackal. He made the gun as a job for someone else. He doesn’t know why. He doesn’t know who they’re going to kill. It’s not even clear that he knows who he works for, beyond a name and a phone number.

Lacking any awareness of the past, and therefore no ability to understand the future, he acts in what must be considered an amoral way. For to act with morality, you must have some awareness, some context for your actions, and Clooney’s American has none of these things and if you’re wondering if this is somehow a comment on America, of course it fucking is. 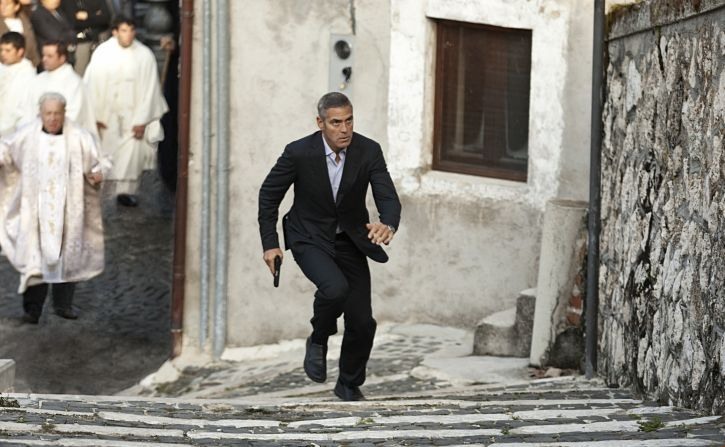 It blows my mind that this movie opened at number one, though with a somewhat lower BO that you’d expect for a three-day weekend, because this is a bleak, spartan film. There’s not a lot of dialog. There’s not a lot of action. There’s a lot of George Clooney, alone, in his room. Alone on the streets of a small town in Italy. Alone in his car looking through a telephoto lens. People try to relate to him, with differing levels of success. It seems as though everyone he cares about ends up dead, and we never know why. We imagine maybe he knows why The Swedes are coming after him, but about halfway through the movie you realize that if his previous job was anything like his current job, he has no idea why they’re coming after him. Oh, because he killed someone, certainly. But who? And why? Why did they need to die? He doesn’t know.

So people end up dead around him and regardless of whether he or we know why, they certainly didn’t. The people he cares about who end up corpses, are as clueless as to who he is and why they are dead as anyone.

The American is very much aware of its place in moviedom. It would like you to have see Day of the Jackal first, then The Quiet American, then Ronin, then this movie. There’s no arc to Clooney’s character, but perhaps his character is the end of an arc that started with the idealistic Alden Pyle. Clooney’s character is very much Robert Deniro’s masterless CIA samurai, after Ronin. No more war to fight, no purpose except skill. Even though he’s George Clooney, he does everything in his power as an actor to banish himself from the movie. When we see him in Italy, fit, in shades, we don’t see a dashing, debonair movie star. We see a random American with no identity, no past, no personality. Maybe he’s good-looking. Maybe people like him because he seems affable. But that’s something they’re projecting on to him. It’s got nothing to do with the man in the film.

There wouldn’t be much of a movie if it were just George Cloooney in Italy being paranoid, killing people, and making guns, so there’s a girl. A very pretty girl. She’s a prostitute. Which I feel like maybe you saw coming. Very popular role for women in movies.

He sees her because he can’t see anyone else, otherwise they’d end up dead. But of course he falls for her, and she falls for him. So there’s tension. Because he must suspect everyone, he suspects her. And maybe he has reason to.

Clooney manages to escape much peril through sheer instinct. He might guess someone he knows is going to try to kill him, but he can’t know why. There’s no greater purpose in anything he does, until he relates to a call girl. That has meaning for him. Will they live happily ever after?

What do you think?