The Planet of the Apes Prequel

I just feel like, if you’re so focused on your IP that you have to fit the name of the original property in there no matter what? Might as well  just call it what it is. You get the sense, watching this movie, that the writers were really happy with themselves. And should be, frankly. They wanted to tell a great action adventure story that explains one of the most popular SF movies ever made, and they succeeded. There’s a fun story here, with some pathos, though none of it belongs to the humans.

Compare this movie to Predators, an entirely forgettable flick. Predators knows the culture it’s being released into, it knows everyone just wants to see the main event, and so literally dumps a collection of random characters into a jungle with zero backstory and has them fight aliens for ninety minutes.

James Franco is the mad scientist who…I was going to write “obsessed with his father’s Alzheimer’s, looks for a cure” except he never really seems obsessed about anything. He has a dad with Alzheimer’s the same way I have a car that needs a tune-up. I understand it, it’s plausible, but there’s no human connection there.

The film deftly hits all the bulletpoints you need to set up the 1968 movie.

You get all that here, and it’s well-done. There are some goofy bits, there’s a moment where a monkey picks a lock and it’s really only goofy because the music they used made it seem like a comic heist movie. There’s a point where one monkey literally tells another monkey “Apes are stupid” and the second monkey strokes his chin and then goes out and fixes that. We see a primate facility with about 50 monkeys on the inside, but as soon as they leave via the window, there are 500 monkeys. Maybe the primate facility is some kind of monkey-TARDIS!

There are relationships at the heart of this story, and that’s good.  It goes a long way toward explaining everyone’s motivations. But those same relationships are also the problem at the center of this film. This movie has something in common with District 9 in that both are movies about humans sharing the planet with another intelligent species, and there isn’t a single human being in either movie who’s worth a shit.

I wonder if this movie knows that, though. Did the screenwriters notice that James Franco’s character was an idiot? Did they think there was pathos between him and his father? Did they think we’d ever feel like there was a real relationship there? Some unpleasant stuff happens to James Franco’s dad in this movie, and Franco’s reaction is less emotive than that of an audience member. I’ve gotten more emotionally upset upon returning home to discover I was fucked at the drive thru than we ever see Franco get watching his dad, John Lithgow, waste away.

Why is John Lithgow in this movie? He has like 10 lines. You don’t need Dr. Emilio Lizardo for 10 lines, you don’t need the guy who originated the role of Rene Gallimard when all your going to do is tell him to look confused for 20 minutes.

Brian Cox is in this movie! Another great actor with about 10 lines. Why do you need the best Hannibal Lecter we ever got, why do you tap Hogan from the Sharpe’s series when all you need is a mildly malevolent security guard? It’s bizzare.

Freida Pinto, I’ll grant you. You need an…*ahem* “doe-eyed victim type,” to stand around and look pretty? Ok. Sure. She’ll do. Why not? She’ll probably be doing that for the next 10 years, or when she hits 32 whichever comes first.

Don’t get me wrong, I thought she was perfect in Slumdog Millionaire, an amazing film. But that film is about falling in love. There aren’t any ideas in that movie! Well, maybe one.

Here, there are LOTS of ideas. It is, of course, about technophobia. Could be a Michael Crichton movie. Science gone wrong! They Meddled in Things Man Was Not Meant to Know! Sure.

There’s stuff in here about obsession, about our relationship to each other. About where Man fits in the scheme of things. But it’s all pushed out of the way because goddamit, the monkeys have to take over the planet and we’ve only got two hours!!

That’s the overwhelming sensation when watching this movie. The writers have some very clever solutions to some tricky problems and I felt as though they were so proud of their solutions, so happy they got Andy Serkis and were going to tell a proper and largely plausible story about how we get from now to Charlton Heston, that they forgot the people. They forgot ideas.

It would have been nice to give James Franco’s character a point of view. Then let’s give Freida Pinto an opposing point of view. Let’s have ideas, then let’s have an argument. Let’s give the audience something to think about, talk about, argue about when they leave the theater.

The first movie used an absurd premise to take potshots at religion, government, racism, all sorts of things. Came out the same year as 2001, a better piece of cinema. But Planet of the Apes was way more popular. People left the Ape movie talking, people left 2001 scratching their heads. 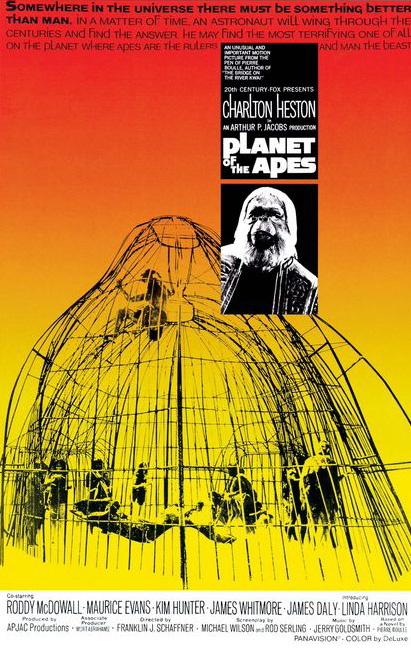 You really should see it if you haven’t, or see it again if it’s been a while. It’s pretty good. People forget how much good SF there is in that movie, its become such a punch line. Charlton Heston’s iconoclastic, misanthropic, cigar-chomping, smiling cynic is a brilliant character, almost unique in film, bravely played.

The original took our culture and turned it upside down to make a statement about our culture. That’s what SF is about. It’s not about predicting the future, that’s a bullshit idea journalists got in the 1950s when SF started to get serious. It’s never been predictive, it’s commentary. There’s a LOT of commentary in the Charlton Heston movie. Not so much here.

The common reaction to this film seems to be that the monkeys look great and are expressive and you feel for them, and the humans are boring and that’s all true. But we shouldn’t be surprised. I watched a piece of foam on a stick deliver the colossal line “luminous beings are we, not this crude matter” and I believed in his humanity more than I did anyone in this movie, including the CG apes.